OK, as promised, I have had a little time today to finally take a few watch photos, it was actually a perfect day, bright but cloudy, if that makes sense 😆

This is going to be about MOBILE PHONE CAMERAS, and I am NOT saying that these little devices are better than a proper DSLR digital camera setup, what I am trying to demonstrate is that you CAN take nice, crisp, clear photos by simply taking your time AND by wearing your glasses if needed while shooting, something I also found out the hard way 😆

I finished this 1904 Hampden General Stark model, 16s – 17j – lever set, about a month ago, so I wanted these pics for my files.
I had intended using my DSLR camera on the tripod, but I ran out of batteries 🙄 So I decided to use my iPod 5 which has a nice 5 mega pix hi definition lens.
I am using the highest file setting which takes about a 27 x 34 inch photo at 2.75 megabytes, so this file is WAAAY too large for what we would need. But as stated earlier, it is easier to shrink down a large photo, than it is to enlarge a small one. Plus you DO NOT loose quality when you shrink down.

I set the watch up outside on a waist high bench, I have one of those little plastic display stands, so it is vertical, with a slight angle. I placed a piece of black cloth for the background.
I try to rest my elbows on the bench top, we need to be very steady, obviously. So with the amount of space that my arms takes up, I roughly calculated about 5-7 inches of distance between the camera and the target.
I took about 12 shots altogether, hoping 3 would be good enough., 4 of the face, 5 of the movement and the rest trying to take a macro shot of a jewel, playing.

I’ll start from when I plugged the pod into the computer and I’ll do a step by step process, and please remember that this is the basics for anyone who is not familiar with the process.

Also, please forgive the photos I took of the PC screen, again, I just used the pod camera, and NO camera can take good photos from a screen. I should have used a screen capture program but laziness took over LOL 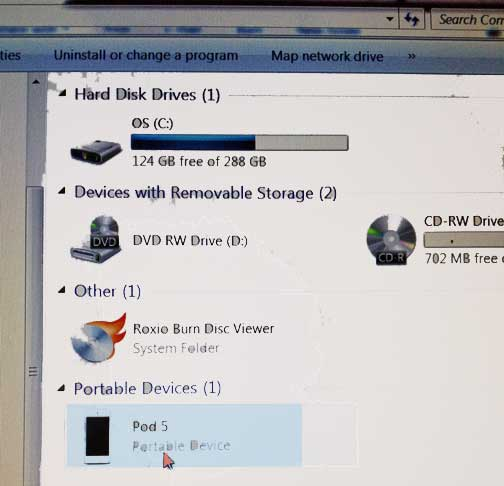